Ovulation is the release of an egg from one of a woman’s ovaries.  After the egg is released it travels down the Fallopian tube, where fertilization by a sperm cell may occur.  Ovulation typically lasts 2-3 days and usually takes place mid cycle of the menstrual cycle, about 2 weeks before the next menstrual period is expected to begin.

If a woman is trying to get pregnant, it’s important to keep track of when ovulation might occur.  Knowing when you are ovulating each cycle is very helpful as it signifies the most fertile time, in other words, ability to get pregnant, at the time of ovulation.

As a woman enters the fertile period of her menstrual cycle, higher estrogen levels cause the amount of salt in her saliva to increase.  The increased salt forms crystallization patterns known as “saliva ferning” because the crystals resemble fern leaves.  By viewing saliva samples under laboratory microscopes, medical researchers found that crystallized ferning patterns became more distinct as fertility levels rise.

The OvuScope was designed and tested by an obstetrician to ensure you can get the same easy-to-see results in your home as the doctor gets in the lab.  The OvuScope’s large viewing area and lab-quality optics make it easy for you to observe crystallization patterns and track your fertility cycle.

The salt or electrolyte crystals that are present in dried female saliva rise significantly prior to or during a normal ovulation period to form miniature patterns which resemble fern leaves.

IMPORTANT:  Saliva samples may be affected by smoking, alcohol or food consumption. Wait at least two hours after these activities before testing saliva. 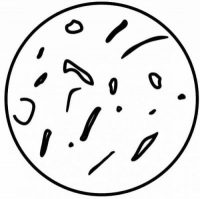 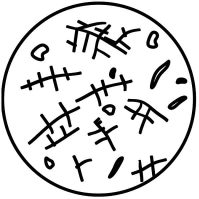